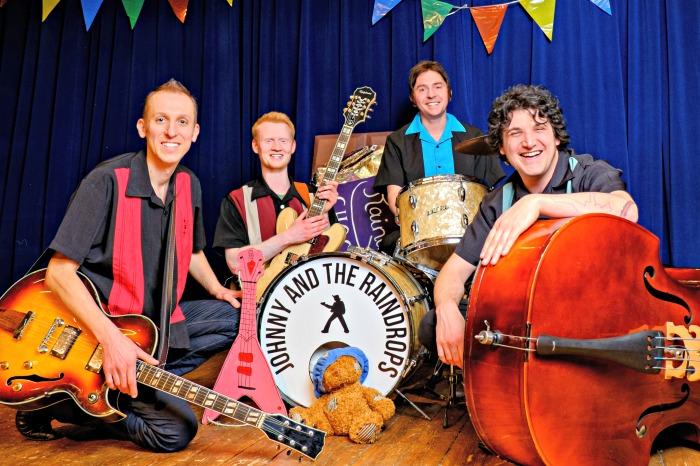 Johnny and the Raindrops

Based in Nottingham the act regularly play across the East Midlands.

Johnny and the Raindrops play gigs for cool kids and their families. They are a dynamic, uplifting band perfect for weddings and parties. The band's jump-up-and-down-rocking-and-rolling-can’t-sit-down-best-time-ever music is brought to life with a whole heap of help from the audience. They promise to get children and grown-ups dancing and moving, singing and grooving.  Raindrops parties are fun, fun, fun for children and a great way for parents to take a back seat. Whatever your needs, the rockin’ Raindrops aim to please.

The band's original songs are instantly catchy. They've made seven albums and know how to prick up young ears. They have released two greatest hits albums! These songs are mixed up with well-known children's classics such as 'Old MacDonald had a band' (with children making up the band), 'Put your finger in the air' (loads of actions) and 'She'll be coming round the mountain' (swing your partners!).

The band have a range of themed shows. Take your pick from pirates, superheroes, robots, Halloween, Christmas or just plain fun! With a little notice, Johnny and the Raindrops can prepare songs or even a set of music of your choice. The rocking Raindrops can also play music to accompany games, such as musical bumps or musical statues. Johnny is great at leading games!

Johnny and the gang have performed highly acclaimed shows at the Edinburgh Fringe, Nottingham’s Theatre Royal, the Wheee! International Children’s Festival, the Towersey Festival, The Gateway to Southwell Folk Festival, Glastonbudget, Farnstock, Nottingham Ice Arena, and hundreds of gigs at local festivals and events. They are experts at entertaining at weddings, parties and other special occasions, and have been wowing audiences since 2008.