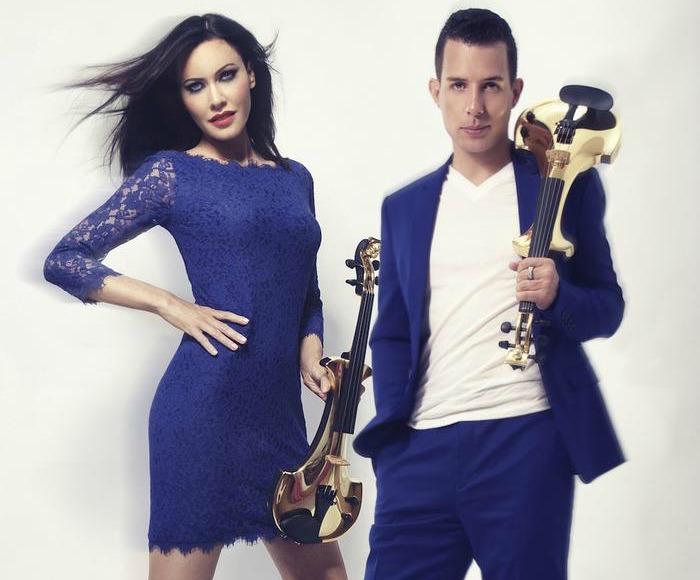 The band is based in London.

FUSE’s eponymous album was released through Edel/Universal Records. The results are innovative but loving reinterpretations of hit anthems for the violin.

The band says, “It’s completely fresh, no one thought that what we do was even possible. Everything you hear is violins! The style that we use when we play is more akin to that of a guitar player, with more soul and electricity – literally! We specialise in blowing away people’s preconceptions.” FUSE are already finding friends with music royalty who appreciate what they do. After raving, “I love what you’ve done, how did you get that sound?”, Francis Rossi appears on the album version of Quo’s ‘Down Down’, Nick Mason of Pink Floyd offered his services as a drummer and Roger Daltrey asked them to support him!

To celebrate the release of their album FUSE are the only string group in the world to exclusively collaborated with Swarovski Crystal to create the most expensive electric violins ever made! Each violin has over 50,000, each crystal individually applied to the bespoke carbon-kevlar Bridge violin body. Each FUSE Signature Swarovski violin is worth over $1,500,000 and was launched to the media in-store at the world famous Harrods.

In 2013 FUSE’s Ben Lee became the 5-time Guinness World Record as the Fastest Violin Player in the world. Ben performed “Flight of the Bumblebee” by Nikolai Rimsky-Korsakov at over 17 notes per second making him the first player in history to break the magic-minute mark – Ben can proclaim to now have the fastest fingers in the world!

What FUSE do can have a truly global appeal; there are no language barriers. Whilst they are very proudly a string band, listeners can sing along to the choruses that we all know. With the release of “FUSE”, they will be bringing their unique brand of entertainment to a whole new audience!