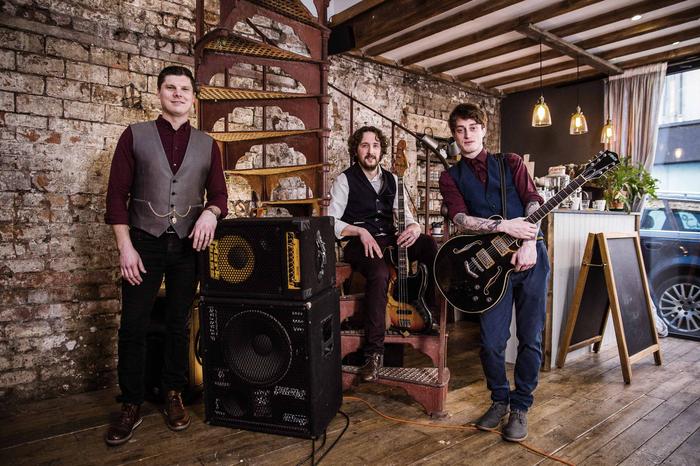 The band are based in Bristol and regularly gig across the South West, London and Wales

Fake Plastic Chairs are a Bristol based wedding, corporate and all round party band on a mission to make your event the very best it can be. They are a power trio with impressive three part harmonies and bags of energy guaranteed to get a room full of  guests on the dancefloor and keep them there until it's time to head home.

The guys have been gigging for many years on the wedding/corporate circuit under different guises playing regularly on the festival circuit as well as performing abroad for big name corporate clients. The band members have played for companies such as Microsoft, the National Trust and the Armed Forces and performed at renowned venues including Kew Gardens, Glastonbury, Marlborough Jazz festival and several European festivals including Genk Onstage and more.

FPC are happy to travel to wherever your event is happening. They have played throughout the UK and abroad with Sweden, Sardinia, Spain and San Diego among the destinations they have eek to entertain (clearly they love places beginning with S). Whatever the occasion you can be sure when you book FPC as your band, you're booking the best!

Modern
What you know – Two Door Cinema Club
Shut Up and Dance With Me - Walk the Moon
Chocolate – The 1975
Happy – Pharrell Williams
Harder to Breathe – Maroon 5
Lightening Bolt - Jake Bugg
I Only Lie When I Love You - Royal Blood
Kathleen - Catfish and the Bottlemen
Sunday Morning - Maroon 5
Shut Up and Let Me Go - Ting Tings
Harder to Breathe - Maroon 5
Pelican - The Maccabees
Hold Back The River - James Bay
Forget You - Cee Lo Green
Molly's Chambers - Kings of Leon
Little Lion Man - Mumford & Sons
Steady, As She Goes - The Raconteurs
Don't Look Back Into The Sun - The Libertines
No One Knows - Queens of the Stone Age
Go - Chemical Brothers
Moving to New York - The Wombats
Nineties/Noughties
Song 2 - Blur
Place Your Hands - Reef
How You Remind Me - Nickelback
Vertigo - U2
Chelsea Dagger - The Fratellis
Mama Told Me Not To Come – Tom Jones/Stereophonics
The Bartender and the Thief - Stereophonics
When The Sun Goes Down - Arctic Monkeys
Place Your Hands - Reef
Mr. Brightside – Killers
Sex on Fire - Kings of Leon
Shine - Take That
Take Me Out – Franz Ferdinand
Are You Gonna Be My Girl - Jet
Seventies/Eighties
Sweet Child O’ Mine – Guns ‘n’ Roses
Don't Dream It's Over - Crowded House
Message in a Bottle - The Police
Pride (In The Name Of Love) - U2
The Power of Love - Huey Lewis and the News
This Charming Man - The Smiths
Livin on a Prayer - Bon Jovi
Video Killed the Radio Star – The Buggles
Saturday Night's Alright (For Fighting) - Elton John
All Right Now – Free
Don’t Stop Me Now – Queen
Play That Funky Music – Wild Cherry
Signed, Sealed, Delivered – Stevie Wonder
Sweet Home Alabama - Lynyrd Skynyrd
Fifties/Sixties
You Really Got Me – The Kinks
Johnny B Goode - Chuck Berry
Brown Eyed Girl – Van Morrison
Brown Sugar – Rolling Stones
Hard to Handle - Otis Redding
Saw Her Standing There - The Beatles
Daydream Believer – the Monkees Jumping
Jack Flash – Rolling Stones