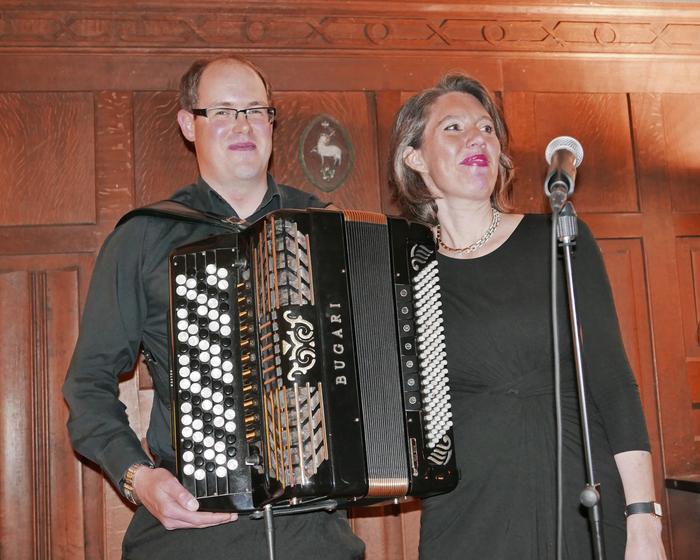 The act is based in Edinburgh and happy to travel for events.

Enchanté are a unique accordion and vocals duo who present a fresh programme of exquisite French songs and music, as performed by Heidi Innes and Paul Chamberlain Their repertoire is taken from the songs of Piaf, Dassin, Trenet and Aznavour to the American Songbook. Expect laughter and exuberance!

Mezzo Soprano, Heidi studied singing under Francoise Dume at the Paris conservatoire Paul Dukas from 2004-2006 and was then awarded a Mmus at Trinity College of Music 2008 where she studied under the direction of Teresa Cahill. She sang the role of Mere Marie in Poulenc’s Les Carmelites at Blackheath Concert Halls and as Mercedes in Bizet’s Carmen with Mean Time Opera. Heidi performed Verdi's Requiem at Glyndebourne in 2002 and Opera Holland Park Chorus in 2012 A versatile performer Heidi has performed in many unusual places including an Oxford Punt on the river Isis.

Operatic engagements have included Opera Holland Park Chorus 2012 (Lucia de Lamermoor, Cosi Fan Tutte) as well as the role of The Mother in Hansel and Gretel (2011) with Opera at Home (The Reform Club and All Saints' Church in Fulham) Orestes (La Belle Helene) for Suffolk Opera production at the Theatre Royal in Bury St Edmunds (2010) and Queen of the Night in Mozart’s Magic Flute in London (2009).

Early in 2013, she revived her love of Baroque Opera, performing the role of Summer in Purcell's King Arthur at the Canongait church on The Royal Mile with Edinburgh Studio Opera. Also that year, 2013 Heidi was Artistic Director of a series of charity concerts “Arias at Colstoun House” in which she performed (www.colstounopera.com). In June 2014 she performed in a touring production of Benjamin Britten’s Albert Herring, in the role of Mrs Herring for St. Andrew’s Opera with conductor Michael Downes and Tania Holland-Williams at The Byre theatre. She had the privilege of studying with the pianist Malcolm Martineau at The Oxonfoord International Summer School in 2017 singing the Schubert setting of the Mignon Song Cycle.