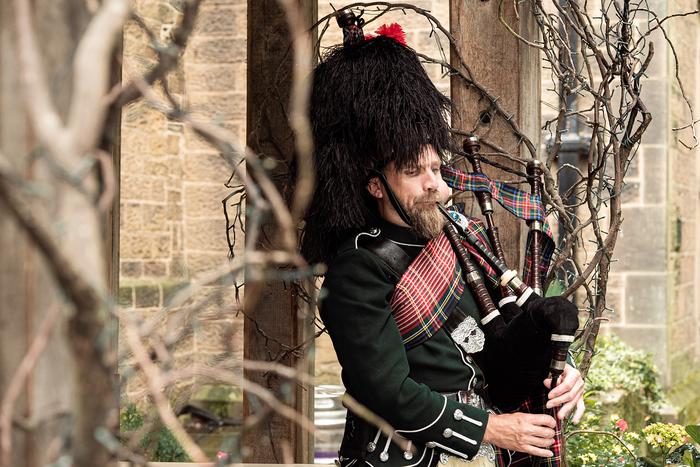 Ed is based in Sheffield but is prepared to travel within an 80 mile radius to functions. Most of the events Ed plays at are Yorkshire, Derbyshire, Nottinghamshire, Lincolnshire, Lancashire and Cheshire.

Ed has over 20 years experience piping at 1000s of public and private events including weddings, parties, corporate dinners, Hogmanays and Burns Suppers. He's also played at high profile events such as the IIFA (Bollywood) Awards at Sheffield Arena and has appeared on ITV's 'The Dales' and 'The Lakes' performing at weddings featured on the programs.

Ed takes great pride in playing the bagpipes and plays to a high standard. He was taught by an ex Pipe Major and he has performed and competed in grades 3 and 4 with Ashbourne and District Pipe Band. Ed currently plays solo and teaches the bagpipes privately and also in the army.

He also plays the Scottish bellow blown smallpipes which are a quieter alternative to the highland bagpipes. These come in useful for wedding ceremonies and other occasions where some pipe music is required indoors and the client doesn't require to blow the roof off.