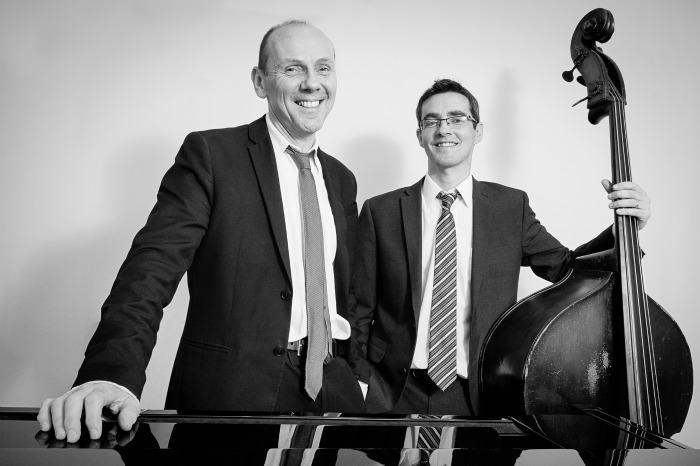 The band is based in the Manchester area but regularly perform all over the country.

Dinner Jazz Duo are a high quality, sophisticated band that play popular jazz standards by composers such as George Gershwin, Cole Porter and Antonio-Carlos Jobim. The piano and double bass duo are outstanding, highly regarded musicians, and make an ideal accompaniment to a wedding reception, corporate event or private party. They are guaranteed to create the perfect atmosphere for any occasion.

Both musicians have a wealth of performing experience and have been the first choice for many of the country’s largest clients, including Manchester United, the Royal Exchange, Center Parcs, the Royal Society, Berkeley Hotel, Radisson Hotel, Canary Wharf and the NEC Birmingham.

Paul Kilvington (piano) has been in the music industry for over 25 years touring extensively around the world. He has a number of television appearances to his credit (Top of the Pops, Des O’Connor Show, Smash Hits Awards, World Music Awards) and has performed in some of the UK’s largest and most prestigious venues, such as the Wembley Stadium. Paul has shared the stage with the likes of Bob Mintzer from the Yellowjackets and Brandford Marsalis. He has also performed with Jack Jones on his last 2 UK tours.

Ed Harrison (double bass) is the first choice bass player for many of the country's leading figures in jazz. He is known for his dazzling technique and versatility on the instrument, and has played on the Prague and London jazz scenes.