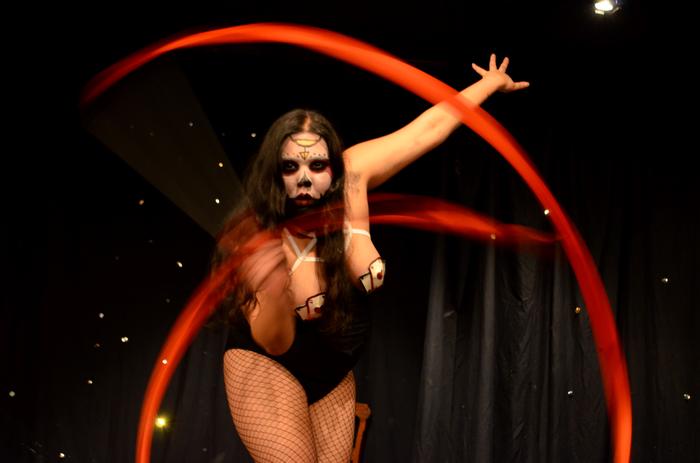 Bazzar! Is a mash up of circus, magic and burlesque, a veritable mix of tricks and treats for the eyes. Follow Sharrow through a macabre journey as her Ribbon dancing and umbrella skills are merged with a twist of tease and tantalization. Be entranced by her routine as it culminates with a mild cheeky reveal (can be performed without stripping off anything items of clothing). While this act has an infusion of horror and supernatural, it is perfect for all season.

The act is inspired by classic and vintage horror icons, such as Baron Samedi, the undead and even Disney based films like the princess and the frog. There are also cultural and fairy-tale based inspiration, for example The Voodoo pantheon, The pied piper. This manifests in the act through costuming e.g black and white tailored clothing and nods to vintage styles, with a splash of color and distinctive make up. In the actual performance Sharrow uses her ribbon and umbrella to to make hypnotic and gesturing movements reminiscent of the pied piper and other occult forces. Her versatility however means it can be adapted if necessary due to audience and stage requirements

The movements for the act are very evocative of the theme, with offbeat movements that at one time may be considered typical of a medieval jester and at the next are beckoning and suggestive like an occult temptress. Sharrow will also incorporate impressive tricks of the trade by using her props such as the ribbon and umbrella to flow from one influence to the next. This will leave the audience entranced and invested in the act until the final reveal.