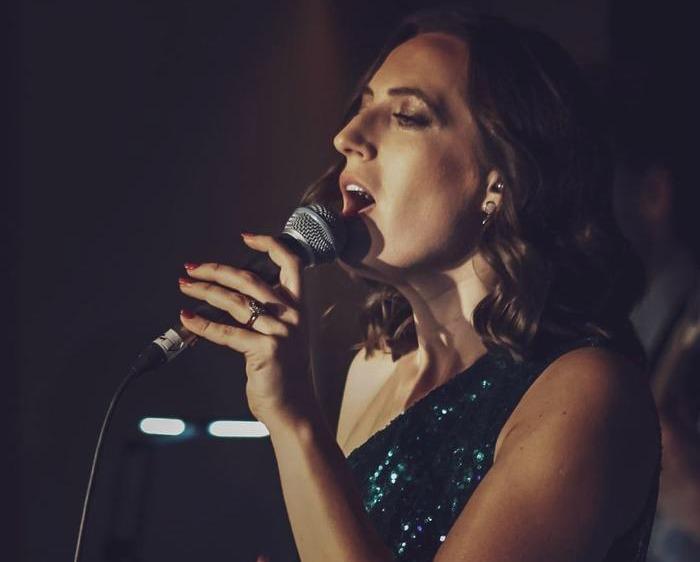 The band are based in Newcastle upon Tyne and frequently play across the North East of England and further afield.

A foot tappin', fun swing band from the North East of England that's sure to get you up and dancing all night long!

Atomic Swing is fronted by the multi-talented Alice Grace. Grace is a British jazz singer whose career began touring with established UK jazz big band The National Youth Jazz Orchestra and guest singing with the James Pearson Trio at the famous Ronnie Scott’s Jazz Club, before landing a place to continue her musical education at the London Guildhall School of Music and Drama and the Conservatorium van Amsterdam.

Alice sang with a variety of jazz and soul ensembles performing at prestigious venues such as The Southbank Centre, The Barbican and the Royal Albert Hall in London, as well as more intimate jazz venues across the UK and Europe, sharing the stage with some of her biggest jazz influences; Norma Winstone, Jacqui Dankworth, Cleveland Watkiss and Pete Churchill.

Since graduating with BMus Hons in 2010, Alice’s performing has taken her to many countries, including a two year stint in the Middle East where she co-founded Time Out award-winning band The Swing Revue; performing a packed schedule of high profile events and helping build a hugely successful residency at Jazz Pizza Express.

Performing with a collection of the finest session musicians from the North East, Alice’s leadership of Atomic Swing brings a taste of 1920s America and later to the UK.

A selection of tunes from our repertoire (straight jazz and pop in a jazz style) include:
Yes Sir, That's My Baby
All Of Me
Bei Mir Bist Du Schon
Between The Devil And The Deep Blue Sea
Marry You
Sunday Morning
Alright, Okay, You Win
Ain't Misbehavin'
Hotel California
Hallelujah I Just Love Him So
Heart Of Glass
As Time Goes By
Ain't Nobody
Blues My Naughy Sweetie Gives To Me
I've Got My Love To Keep Me Warm
Five Foot Two
Route 66
You Make Me Feel So Young
Jammin
Bare Necessities
Cheek To Cheek
All The Things You Are
September
At Last
Call Me Maybe
Crazy
Georgia On My Mind
For Once In My Life
It Don't Mean A Thing
Hit The Road Jack
Honeysuckle Rose
I Can't Give You Anything But Love
I'm Beginning To See The Light
Let's Do It (Let's Fall In Love)
My Baby Just Cares For Me
Orange Colored Sky
Satin Doll
Someone To Watch Over Me
Sway
There Will Never Be Another You
They Can't Take That Away From Me
You're Nobody Till Somebody Loves You