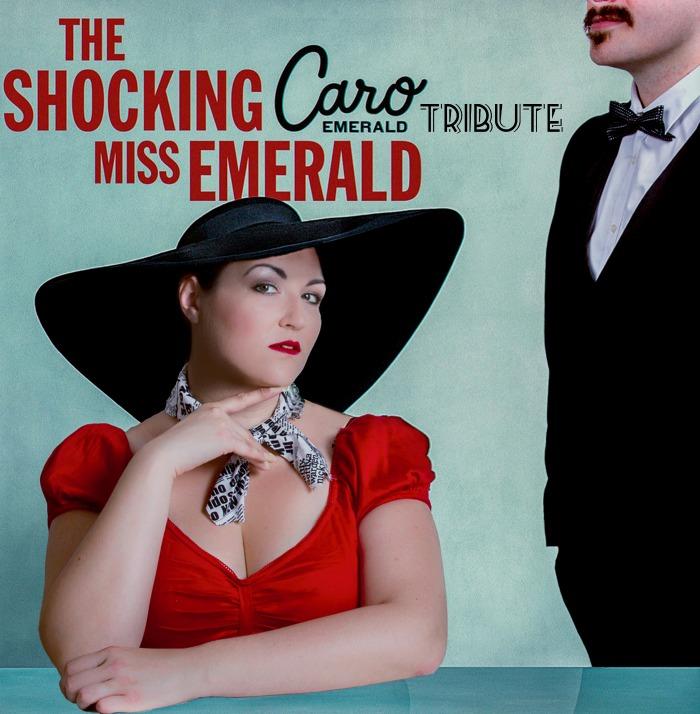 The act is based in Halifax, West Yorkshire but will travel UK wide and beyond for events.

This Caro Emerald Tribute is set to not only emulate the smoldering vocals of the songstress but to be a very close look alike to the glamorous singer. Caitlen Bailey, who performs this sensational Caro Emerald Tribute, has an uncanny visual look of Caro, with her curvy figure and dark tresses. Caro Emerald herself said “I thought it was me!” in a recent BBC interview and went on to say “It’s so well done!”

Caro Emerald herself personally invited Caitlen to her 2012 sell out concert guest list at Bridgewater Hall in Manchester and also took the time to have a photograph together at the end of the show. The band members joked “this is the new boss!”. Her management, Grandmono, have shown great interest in the recordings and general progress of this show and Caro has personally responded to Tweets and Facebook updates.

There is nothing more authentic than having the acknowledgment and continued support from the original artiste and management making this Caro Emerald Tribute Show the one to book!!

The Caro Tribute Emerald Show includes all of the songs from the 1st album which have been described as “the sound of a party that begins late and carries on until the sun rises”. Songs like “Back It Up”,” Stuck”,”Riviera Life”, “That Man” and of course “A Night Like This”. Songs from the new number 1 album, ‘The Shocking Miss Emerald’, are also included with hits such as “Tangled Up”, Liquid Lunch”, “Completely”, “Pack Up The Louie” and more.

The show can also to be tailored and extended to include songs which complement the music of Caro Emerald for those who would like to extend the jazz swing style show.

The Caro Emerald Tribute Show will provide a show full of dancing and flirting and audiences will leave feeling that they have inhaled the full Caro Emerald experience. This tribute show is available with backing track or live musicians and would be perfect for weddings, corporate events, dinner dances, parties, casinos, theme nights and all types of functions in the UK and abroad.

“We hired Caro Emerald Tribute for a private party and she proved to be an excellent choice –the tribute set was like having the real Caro in the room and her upbeat second set of contemporary party songs significantly added to the evening’s dance enjoyment for all guests. We will definitely look to bring her in on other parties.”